On his blog at O Globo newspaper, journalist Lauro Jardim states that the Provisional Measure (PM) for football (984/2020) was extended until October and already has 91 proposed amendments. One of them, from deputy Jerônimo Goergen, wants to transfer the clubs' tax debts to CEF. It is as if they became debtors of Caixa. The payment would be made with resources that the clubs receive from Timemania and would pay nothing more than what they collect with the lottery. 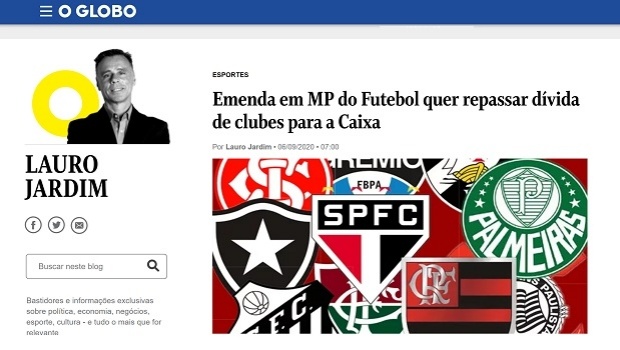 “On paper, it's interesting. However, the clubs receive a total of R$ 60 million (US$11.3m) annually from Timemania, while their debt at Profut is estimated at R$ 5.3 billion (US$999m),” explains Jardim.

In his justification, Deputy Goergen affirms that the Union can receive debt from clubs in sight at a time when the Treasury's single cashier needs more than ever resources to overcome the challenges of the COVID-pandemic. The big football clubs in Brazil came to crisis as indebted as the Brazilian state. A recent survey by Valor Econômico newspaper shows that the clubs’ biggest creditor is the Government and that clubs' total debt is R$5.3 billion (US$999m).

In this bleak scenario, there is a chance to receive the entire fiscal debt of football clubs, which are in the highest risk group of legal entities in the country, with obsolete management and governance structures, but can be subject to a government action with exponential gains for the whole society.

Law No. 13,988/2020 finally regulated the tax transaction, provided for in the Tax Code more than 50 years ago. Among others, the law allows clubs to settle such debts at a discount of up to 70% and pay the remaining balance in installments within a maximum term of 145 months. The Government, however, can receive the full amount in cash.

By way of illustration, knowing that the Treasury needs to analyze on a case-by-case basis, if the clubs make a tax transaction with the maximum discount provided for in that law, the total amount of debts would be R$1.6 billion (us$301m). Considering that they received R$427 million (US$80.5m) from the lotteries in the last five years, securitization of these receivables for the next 20 would allow the payment in cash of the tax debt.

And it would still be possible to imagine an immediate injection of some resource into the clubs' cash flow to feed the circuits that keep the football economy running, guaranteeing the maintenance of jobs and income in this important sector for the country. Caixa, which closed 2019 with a balance of R$700 billion (US$132m) in the credit portfolio, much of it in the long term, would certainly be very interested in this financial operation guaranteed with lottery proceeds.

Even more if among the counterparts is the obligation of the clubs to promote the lottery, which would certainly increase the collection and until today the clubs never did. As it operates the payment vehicle itself, the risk can be assessed as close to zero. If Caixa does not take advantage of such a secure guarantee, other banks may be interested.

The gains in this operation are high: the National Treasury receives all the clubs' debts in sight; Caixa Econômica Federal, which belongs to the Federal Government, earns interest on prepayment of receivables with virtually no risk and the Government still opens the possibility of restructuring the clubs so that they can overcome this liquidity crisis, attracting new investments and generating even more jobs and income in the country.

In 2006, in Timemania (Law nº 11.345 / 2006), for example, clubs confessed debts that had not yet been confirmed, with the promise that the lottery would collect R$520 million (S$98m) per year, which would be enough to pay the portion that all clubs took over the funding. In the first year, Timemania's lottery collection did not exceed R$ 100 million (US$18.9m) and until today it has not reached the estimate of R$520 million (US$98m) presented by Caixa Econômica Federal in the justification of the program. Thus, the clubs ended up, in practice, paying the duck for the difference between the expectation and the reality of the lottery collection, even though they are not responsible for the operation of the product.

This is an opportunity for Timemania to finally fulfill the role for which it was created, resolving once and for all the tax liabilities of Brazilian clubs, allowing them to restructure themselves under market conditions to generate even more jobs and income in the country. As indicates the FGV study carried out at the request of the Federal Government itself, the football production chain generates 371 thousand direct, indirect and induced jobs in Brazil, but has the potential to generate 2.1 million if the clubs were better structured.

After all, it is not possible to continue in the Sisyphus saga, condemned by Zeus to the eternal repetition of pushing a heavy stone to the top of the mountain, only to see it rolling down and having to repeat the effort again. There is a huge opportunity for football and the combined tax transaction with Timemania can be the definitive solution to the fiscal issue of Brazilian football.