As the official betting partner of CONMEBOL Libertadores, Betfair is launching this week of the Final between Palmeiras and Santos an exclusive commercial focused on the two teams to highlight the great game that will crown a champion. Filmed on the beaches of Rio de Janeiro, the video will be shown both on social platforms and on Globo and Fox Sports channels. 'As a brand, we are extremely proud to have been an official partner of CONMBEOL Libertadores this year,' commented Maria Flavia Losse, Betfair spokesperson. 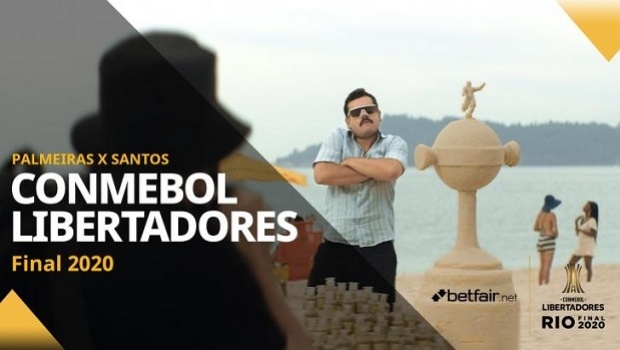 The objective of this film is to bring life to the brand positioning, that "All Result Is Possible", even a fan who can become rich by selling sand on the beach! The commercial was recorded in Rio de Janeiro where the final will be played at the world-famous Maracanã Stadium. The production shows the whole journey of a fan who gets rich by selling sand on the beach in Rio.

The proximity of the match stirs the emotions of distinguished fans from both finalists. Idol of Palmeiras in winning the unprecedented cup in 1999, Alex does not hide his anxiety about the decision and believes in winning the second cup.

"I waited 20 years to see Palmeiras in the Libertadores final agai, so I'm really excited to see them face Santos. It's great that Betfair is celebrating a great moment for Brazilian football with two teams from the country struggling in the decision. I’m support Palmeiras to bring home the Libertadores trophy," said Alex.

"As a brand, we are extremely proud to have been an official partner of CONMBEOL Libertadores this year and it is great to see two Brazilian teams in the final in Rio. We hope that our TV commercial will focus the spirit of all South American fans who celebrate the fact that anything can happen at Libertadores and that any result is really possible," commented Maria Flavia Losse, Betfair spokesperson.

Santos has three Libertadores victories in all: 1962, 1963 and 2011. If they win the “tetra” (fourth title), the club will become the biggest Brazilian champion of the competition, ahead of São Paulo and Grêmio.

Betfair's analysis followed the clubs throughout the competition and ends by pointing out who is most likely to win. Palmeiras is more likely to become champion in the grand finale of CONMEBOL Libertadores, with a 60% probability of reaching their second title in the competition.

Santos appears with a 40% chance of winning the competition and becoming the first Brazilian club four times champion of the Libertadores.