Betando is a new Brazilian channel that offers courses and content focused on sports betting with the lawyer and specialist in the sector, Pedro Feitosa, as the main representative. In a brand promotion action, Betando gives its users the possibility to win an official Real Madrid jersey autographed by Roberto Carlos and also receive R$100 as a bonus to bet on Betwinner. 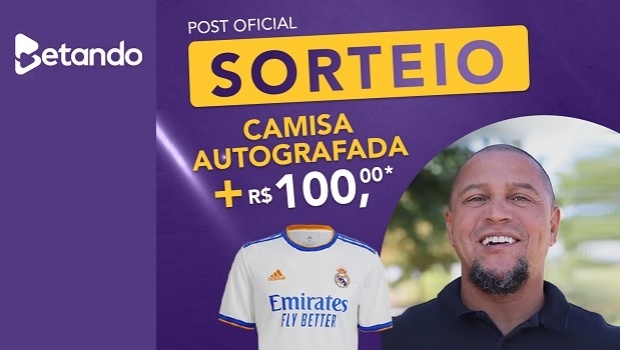 “Can you imagine winning an official jersey signed by Roberto Carlos and still receiving R$100 as a bonus to bet on BetWinner?” This is Betando's proposal on its social networks to present itself to the market and at the same time reinforce the recognition of the Betwinner brand in Brazil.

Bookmaker Betwinner, which has grown and consolidated itself in the country as one of the main ones in Brazil, has the former Brazilian national team star as its ambassador.

Betando is a personalized channel focused on courses on sports betting and has lawyer Pedro Feitosa, who nine years ago entered the universe of sports betting, as a specialist in the activity, becoming one of the most respected bettors in the market.

Currently, Feitosa is a professional sports trader and acts as a mentor, bringing his vision and experiences acquired throughout his career in the world of betting, having already transmitted his knowledge to more than 4,300 students.

Betando and BetWinner created the promotion to engage more and more fans of sports betting and Roberto Carlos, the site's ambassador. To participate in the draw, users just need to log into Instagram, give a like to the official photo of the promotion, mark two profiles in the comments and follow @betandobr, @pedrofeeitosa and @betwinnerbrasil.

It is not worth tagging fake, commercial or famous profiles. In total, three prizes will be drawn:

The draw will be live, on Betando's Instagram, tomorrow (October 15th), at 2 pm.

The site promises that soon the user will also meet Zé, a fan who plays with his heart and strategy. In addition to cheering on his favorite team, he also does it for the positive results of his sports betting. In total, there will be 16 episodes to receive exclusive Betando tips to become a professional sports bettor.