The club had already agreed with Marsbet

Juventude signs with PixBet, will have two bookmakers on its uniform

Brazilian football club Juventude closed a sponsorship deal with betting site PixBet, which has already debuted in the team's uniform last Saturday (9), in a 1-1 draw against América-MG. The brand will be displayed on the shirt's front bar until the end of the 2021 season. The club will have two uniform betting sites since in August it had also signed with Marsbet. With Juventude, PixBet reaches four sponsored Brazilian clubs. 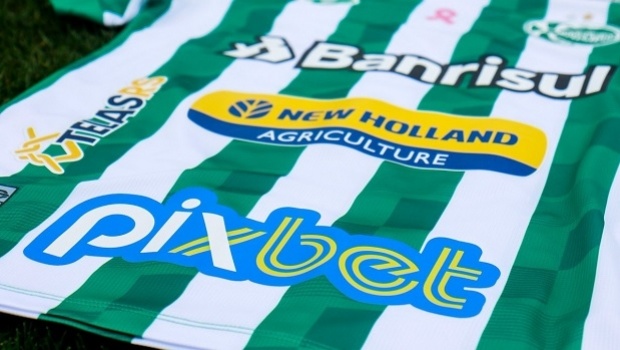 Under the contract, the company's logo will also gain visibility on press conference backdrops and on two advertising boards at the club's training center. In addition, PixBet will have the status of official sponsor of Juventude's website and social networks, with the right to four posts on its Instagram and Facebook pages, in addition to sending one marketing email per month.

Lastly, the agreement also guarantees the delivery of 30 official shirts and 10 tickets to betting site guests, who will thus have access to the Alfredo Jaconi Stadium on match days, respecting all the rules and guidelines imposed by the health authorities.

“PixBet had already sponsored some punctual matches of Juventude, a fact that motivated the evolution of this relationship to a longer-lasting contract,” commented Michael Alexandre, commercial manager of PixBet.

“The renewal of this deal demonstrates how much the partnership we had in a timely manner worked and how much Pixbet believes in Juventude’s brand and in the potential return that the exhibition will bring. In turn, Juventude is proud to have, now in a definitive way, this brand stamped on its shirt until the end of the championship. It is through these partners that we can build an institution that is increasingly stronger and present in the roster of the great clubs in Brazilian football,” celebrated Fábio Pizzamiglio, Youth Marketing Vice President.

“The occasional sponsorships were essential for us to be successful in this larger contract. It is the beginning of an intense work, with a lot of activation, which we are sure will provide many results for the client and the club,” highlighted Mateus Lemos, business executive at Wolff Sports, the agency that brokered the agreement.

On Juventude side, the club will have two betting sites on its uniform. In August, it had already closed with Marsbet, which since then has visibility in the front of the game shorts (on both legs) and also in the physical and digital media of the club from Rio Grande do Sul. Unlike PixBet, however, the contract with Marsbet was signed until the end of the 2022 season.