The sportsbook takes the risk

Atlético-MG is already the champion of the 2021 Brazilian Championship, at least according to Betfair. One of the biggest online bookmakers in the world, Betfair decided to make the 'early payout' and has already deposited the money in the account of those who bet that ‘Galo’ would win the Brasileirão championship, even if the title has not yet been confirmed mathematically. 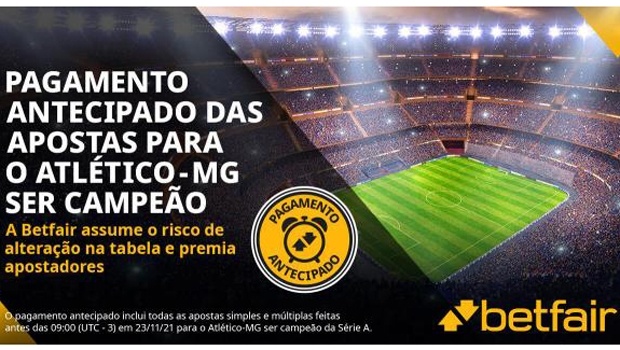 But it should really be a matter of time before Atlético-MG can shout “champion”, as the club has an 8-point advantage over the second-placed team. Betfair odds pay 1.03 for every dollar bet on the team fromMina Gerais, a 98% probability that Atlético Mineiro will be champion.

With Flamengo, the main competitor in the dispute, completely focused on the final of the CONMEBOL Libertadores, ‘Galo’ can confirm the title in the coming days. With such favorable numbers and scenarios, the level of confidence is high and Betfair decided to reward its players. Those who placed bets on the Minas Gerais club on the Betfair Sportsbook until 9 am this Tuesday (23), have already received the money to make the anticipated celebration.

There are still four rounds for Atlético-MG in the Brasileirão championship, but Betfair has already paid the bettors.

Too soon? The punters can argue that, aiming for the final of CONMEBOL Libertadores, ‘Verdão’ will have the head in the Latin American tournament and will not present difficulties to Atlético-MG. But it is worth remembering that Flamengo is still in the fight for the title and has a mathematical chance of being champion. Betfair markets remain open to those who believe that any result is possible and a turnaround could still happen in the final stretch of the Brasileirão.

Atlético-MG's other games in Brasileirão are: Fluminense (at home), Bahia (away), Red Bull Bragantino (home) and Grêmio (away).

If Atlético-MG does not assert the gigantic favoritism and does not confirm the title, Betfair will assume responsibility for the decision and will make a new payment for those who have bet on Flamengo, the only team still with a chance of stealing the title from Atlético-MG. Bets placed on the Betfair Exchange also remain open until the end of the championship.