Betano anticipates payment to bettors on Atlético-MG as Brazilian champion

Users of Betano that bet on Atlético-MG, the club's master sponsor, can already check their pockets. The sportsbook decided to pay all those who believed in the ‘Galo’ (Rooster) as champion of the Brazilian Championship. “The level of trust is high and Betano decided to reward its bettors who trusted in advance and bet on the team,” says the company in a statement. 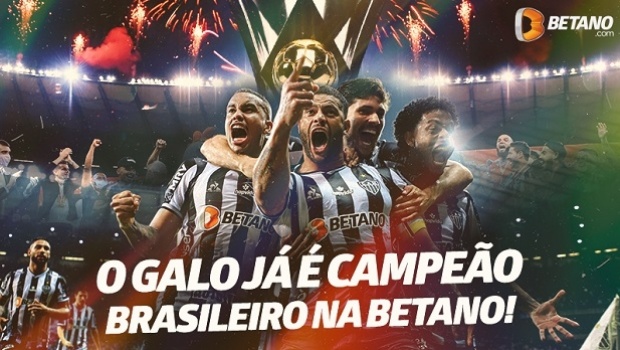 Even with four games to go before the end of the Brazilian Championship, Betano, the bookmaker tht is Atlético's master sponsor, decided to pay all those who believed in the victory of one of the most beloved clubs in Minas Gerais.

All customers on the site received payments this Wednesday (25) for bets that Atlético will be the champion. "Betano, as a way to activate its sponsorship with the Minas Gerais club and recognize the users who trusted the club before the end of the championship, decided to credit bets today and deposited the amount in the users' account," informs the sponsor of the Rooster.

Flamengo, the main competitor in the dispute and second in the tournament, is 8 points behind Atlético and very focused on the final of the Conmebol Libertadores, which takes place next Saturday. According to Betano, “the team from Minas Gerais may confirm the title soon, according to the results and performance of the Rio’s club. Therefore, it must be a matter of time for the ‘Galo’ to cry out ‘champion', as it has a large advantage over Flamengo,” explained Betano in his statement.

This demonstrates Betano's level of trust in its sponsored team and in the strong relationship that exists with the Minas Gerais club. Atlético can already celebrate the title “and the bettors celebrate in advance with the credit of their bets,” affirms Betano.

Atlético-MG has four games to go, against Fluminense (at home), Bahia (away), Red Bull Bragantino (home) and Grêmio (away).