Brazil is experiencing a boom of foreign websites, with brands displayed on clubs jerseys and the government prepares clear rules for the segment. In this article from O Tempo, the main newspaper of the state of Minas Gerais, experts from different areas speak on the subject. “A regulation will be concise in the prevention of money laundering, monitoring for results manipulation and information security,” anticipates Waldir Eustáquio Marques Júnior, undersecretary of the Ministry of Economy. 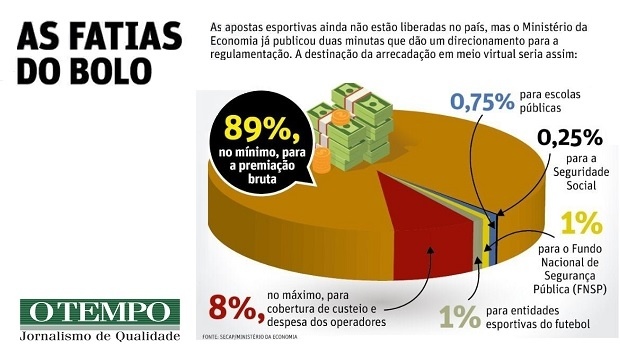 The responsibility for the regulation of Law 13.756, of 2018, sanctioned at the end of the Michel Temer government, which authorizes sports betting in the country, lies with the Ministry of Economy's Secretariat for Evaluation, Planning, Energy and Lottery (Secap-ME). According to the current secretary, Waldir Eustáquio Marques Júnior, the regulation should come out in July this year.

"Sports betting has some peculiarities, different from traditional lotteries, and involve very strong technology requirements that need to be studied a lot, such as the integrity of the sport, prevention of money laundering, prevention of the pathology of vulnerable players," said Marques.

For the lawyer and sports law specialist Eduardo Carlezzo, the government needs to be faster in regulation. “The government needs to accelerate this process and release the concession model as soon as possible. This matter is long overdue, there has already been a back and forth as to the proposal of the system to be adopted, and precious time has been lost. Meanwhile, an illegal market proliferates widely in the country and we have lost the opportunity to generate jobs and tax revenue for the government,” highlights the lawyer.

The Planalto Palace estimates that it can raise between R$ 4 billion and R$ 10 billion only with the regulation of bets, not counting the taxation on the activity. According to Marques, the previous administration was very close to approving a regime that provided for the possibility of companies exploring the sector through the authorization regime. Now Secap-ME works with the idea of ​​a concession.

Even without the regulation so far, the secretariat has already published two draft decrees, in September 2019 and February 2020, presenting a direction. The last text indicates a concession regime for the operation of the service. Only 30 licenses would be granted, through bidding.

"We need regulation at the same level as the best in the world. It cannot defend local and isolated interests. Sports bets need to be made within very well-defined parameters, to know who the companies in this concession are. They need to go through very clear analysis about the origin of that credit," stressed the lawyer and specialist in sports law, André Sica.

Companies already outline plans for new law
Betting sites await regulation. Most of them already have a plan to adapt to Brazilian standards. For Hans Schleier, marketing director at Casa de Apostas, the new legislation is fundamental for the future of the market.

“There is no advantage in an unregulated market. Only disadvantages for both companies and bettors. I reinforce that the betting companies are the most interested in this regulation,” says Schleier. Currently, Casa de Apostas sponsors Botafogo, Bahia and Santos. The company says it is analyzing the market to expand the list of clubs.

Is it a crime?
Without regulations in the country, a website hosted in Brazil that promotes sports betting could be classified as a crime. This is a criminal offense. Brazilian law only considers games administered by Caixa and horse racing.

A jackpot for clubs
In addition to direct sponsorship from sports bookmakers, Brazilian clubs will also benefit from the direct volume handled by gaming as a whole. According to Law 13.756, sanctioned at the end of 2018, teams are entitled to 3% of the volume collected in this type of bet, with 2% coming from oppositions made in physical locations and 1% online.

In an optimistic scenario in which sports betting raises R$ 10 billion per year, clubs could allocate at least R$ 300 million. Without regulation, sports organizations do not take a penny today.

For the lawyer and specialist in sports rights, André Sica, the values ​​of sports betting will not change the status of Brazilian football. "The values ​​will be a new source of revenue for the clubs, but it cannot be expected that it will be so absurd and that it will change the level of Brazilian football. What changes the level is management, with the opening of the market to foreign investors, the realization of club-companies," he points out.

There is yet another important point to be explored here: the negotiation between clubs and bookmakers for the use of brands, something that is not yet clearly defined and should be explained in future regulations.

Still in its infancy in Brazil, the sports betting market generates billions in Europe. In the United Kingdom, which has rules defined since 2005 - updated in 2014 - it is € 26.2 billion. Bets on football, online and offline, represent 35% of the segment. About € 1.5 billion goes to the State as a form of taxes, also generating 106 thousand direct jobs. The data are from the UK Gambling Commission.

Combating manipulation
One point is crucial in the betting regulation process in Brazil: the fight against the manipulation of results. "It is necessary that there is a federal public authority with the capacity to supervise the operations of the companies and that it can act in close cooperation with the police authorities and the Public Ministry," ponders lawyer Eduardo Carlezzo. In practice, the manipulation of results only undermines the market. When less credibility, less gamblers.

The also specialist André Sica agrees with his colleague. "There must be (in the regulations) a very attentive look at the integrity of the sport, so that we do not have match-fixing. For that, we need a very severe punishment, a very strong investigation. I am in favor of this activity, because it must bring a lot of credit for the market as a whole, as it already happens in other markets. But we cannot fail with the diligence to do it correctly," he said.