In addition to being General Manager at Nobile Hotéis, Professor Federico Lannes is a Certified Public Auditor specializing in the management, taxation and compliance of gaming, hotel and casino openings. He wrote articles in important media such as Revista Fortune, Revista Empresa and Games Magazine Brasil, in addition to being a speaker at the 2nd and 3rd edition of the Brazilian Gaming Congress. In this interview for Tribuna de Imprensa Livre, he talks about the regulation of gambling in Brazil, the advances in Latin America and the prospects of the sector for the coming years. 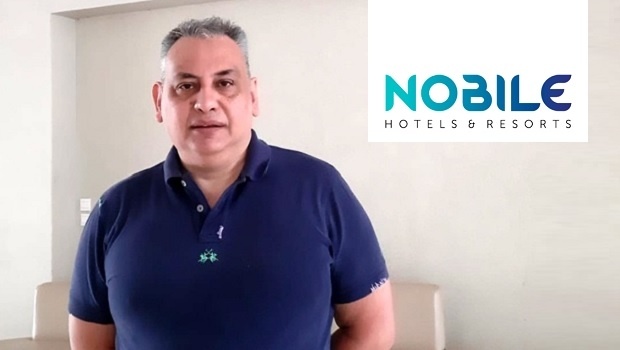 In his interview with Luiz Carlos Prestes Filho, the consultant in international business states that “few countries in Latin America currently have modern regulations and an attractive tax structure for investors”. For him, "there are some exceptions such as Peru and Colombia, which are among the most advanced in the region."

Luiz Carlos Prestes Filho: How big is the legal market for gambling managed by the private sector in Latin America? Highlight for Bingos, Casinos and Electronic Games.
Federico Lannes: First of all, we must distinguish face-to-face gambling in casinos from online gambling. Here are some numbers.

According to a 2017 report by the Brazilian Institute of Legal Gaming (Instituto Jogo Legal), the market for illegal games, together with online, would be US$ 6.4 billion of GGR (Gross Game Revenue). In turn, a study commissioned by the Remote Gaming Association (RGA) and carried out by KPMG in late 2017 estimated the online offshore market at US$ 2.1 billion annually in terms of GGR (source: Gross Gaming Revenue)

Potential of the online gaming industry in Brazil

An enlightening report on the gaming industry in Brazil, prepared by BtoBet (BtoBet: Brazil Betting Focus Latam's Largest Regulated Market in the making, 2017), a leading provider of gaming and betting platforms in Malta, highlights the importance of Brazil as a potential market itself: with 211.8 million people, 87% of whom live in an urbanized context, Brazil has by far the largest population in the region.

However, the country's immense potential is based on the passion of its players for the sport, with sports betting representing 95% of the entire local industry. Today, Brazil has 97% penetration of mobile connections (205.8 million people) and 71% penetration of the Internet (150.4 million inhabitants), with a significant annual increase of 6% from January 2019 to January 2020. The region as a whole has 469 million regular users of online services. Based on statistics, LatAm is a great opportunity for the sports betting market. 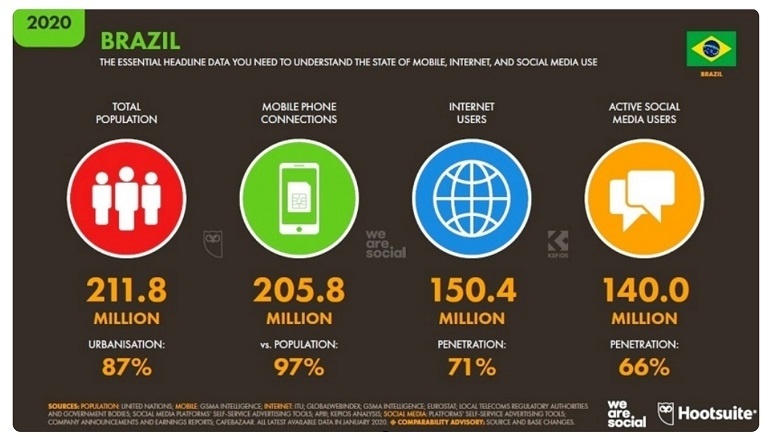 Which countries have a well-structured infrastructure and legal base?
First, let's define what it means to have a modern infrastructure and a legal base. Few countries in Latin America currently have modern regulations and an attractive tax structure for investors. There are some exceptions such as Peru and Colombia, which are among the most advanced in the region. In my opinion, a well-regulated gaming industry should achieve the following objectives:

(1) Have a gambling portfolio that includes all face-to-face and online options;
(2) Demand compliance with operators' rules;
(3) Contribute to the main objectives of the State: health, public education and security;
(4) Money laundering control through independent state entities;
(5) Being an industry that contributes to the country's GDP and generates genuine sources of employment, encouraging investment in the hotel industry, as well as in the gaming sector;
(6) Eradicate illegal gambling through long-term policies. Let us look at the case of some countries in the region that have made rapid progress with these premises.

With the COVID 19 pandemic, Latin American tourist destinations, focused on money betting games, suffered great economic and financial impact. What were these destinations? What is the perspective for the return to normality?
We can say that there is no gaming destination that has not suffered the consequences of this crisis that is starting in its second stage in 2021, in the northern winter. From what we experienced in 2020, we can see some trends.

What are the differences between the Latin American gambling markets compared to Africa; Asia; USA and Canada; and the European Economic Community?
International operators are fully aware of the great potential offered by a market of more than 300 million people. This represents almost 3/4 of the entire population of South America and is made up of people over the age of 18 who can play legally. However, there are marked asymmetries between different countries. There are some countries where there is still no established regulation or gambling regulation. This is where I see many disparities in the region as to what is allowed or not allowed, and how attractive a country can be to an investor not only with physical casinos, but with the regulation of online gambling. If we analyze with figures that in other countries the hotel-casino industry is a great dynamizer of the economy, not only in employment, but also analyzed from the expenses and tax collection of the player, as is the case of Las Vegas, in the State of Nevada. For this reason, the delay in some countries in having an adequate legal framework to generate wealth from the private sector is incomprehensible. This is the great challenge for Latin America.

Each country should adopt a model that is sufficiently attractive to investors, from a fiscal point of view, but that also continues it over time, avoiding tax increases or regulatory changes that give the State more interventionism where it is not necessary. Efficient tax administration can help to encourage companies to formally register and the economy to grow, thereby broadening the tax base and increasing tax revenue. Brazil has a great opportunity to learn the best practices of other countries' tax systems to become a model of regulatory structure over time. Success stories like Nevada in the United States show us the path to continued growth with low tax rates on gambling that later generate higher consumer spending. Below is a graphic of an article that I published in Games Magazine Brasil. (source: Games Magazine Brasil Magazine: “Taxes on gaming and job creation”: The opportunity for Brazil,” Lannes F.)

Do countries that have a quality infrastructure for gambling import software, machines and furniture? Can they manage their brands? Is there room for Latin American countries to produce software, machines, and furniture?
We will have to see the interest of the manufacturers according to the competitiveness of the country they are looking at. In this sense, Latin America has a long way to go and there are central issues that every investor evaluates. I mention below some of the points established in the World Bank's Doing Business guide, which determines a ranking of the most competitive countries for business (source: Making the 2020 business ranking) and also add some aspects that, in my opinion, are central to an economy that wants to attract investments: To have political stability over time; Time to register intellectual property or register a company; Time to obtain building permits; Access to credit for business growth; Access to electricity and water; Good road infrastructure; Soundness of the judicial system, providing legal certainty for investors; Resolution of legal disputes due to insolvency; Recruitment of workers; Contracts with the State through public tenders; Low total tax burden; Regulatory climate favorable to business; Good quality of life from the point of view of health, education, entertainment and recreation; Low levels of corruption in the state; Proximity to population centers, markets, transport routes and ports; Excellent infrastructure for airport logistics; Skilled labor. 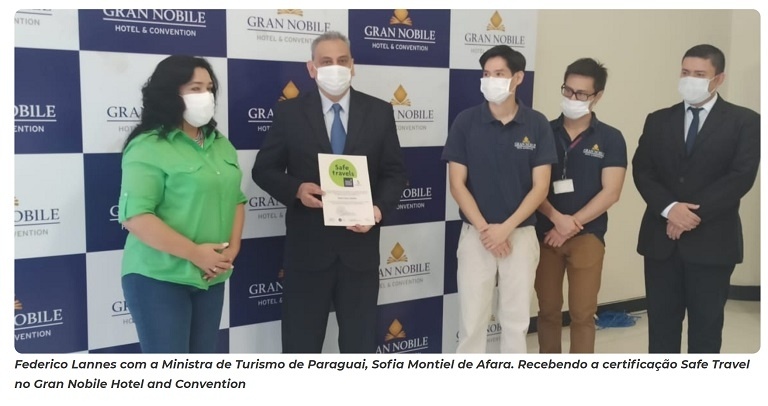 What are the perspectives of the sector for the coming years?
Latin America will undoubtedly be a land of opportunity, mainly due to the great expectation of opening up in Brazil, a country where gambling has been banned since the 1940s, that is, for more than 70 years. Betting on horse racing, state lotteries and poker are the only legal games of chance in Brazil. Bingo was legalized in the 1990s but was banned again in 2007. It is estimated that the Brazilian gambling market may represent US$ 17 billion. Only illegal gambling moves approximately US$35 billion dollars a year, with the jogo do bicho that is very popular in all social classes. It is estimated that Brazilians spend approximately US$ 950 million per year on ignition. It is a country with 207 million inhabitants that closed 2017 with 236.5 million cell phones, of which 62% are prepaid. 92% of Brazilians with Internet access are connected via cell phones, while only 54% of households have an Internet connection. With these numbers it is clear why we say that it will be the great opportunity in Latin America for face-to-face and online gaming.

Does the reality of Latin America in relation to gaming sector administered by the private sector facilitate the path of gambling regulation in Brazil?
Undoubtedly, the experiences of regulating face-to-face gaming have marked a path in the region, but countries like Brazil must look to successful experiences in the region and in the northern hemisphere to generate a regulatory model that promotes investments and jobs in the private sector. Undoubtedly, South America remains a great opportunity, due to the openness that Brazil will have.