Without Carnival, Brazil’s tourism may have legalization of casinos in 2021

Despite facing resistance from the more conservative benches in Brazil’s National Congress, the possibility of regaining the liberation of gambling and legalizing the operation of casinos in the national territory remains under discussion. Experts believe that the market can be legalized in 2021. In this article from LETS Marketing, lawyers Carla Junqueira, specialist in international trade, and Bárbara Teles, specialist in Government Relations, talks about the topic. 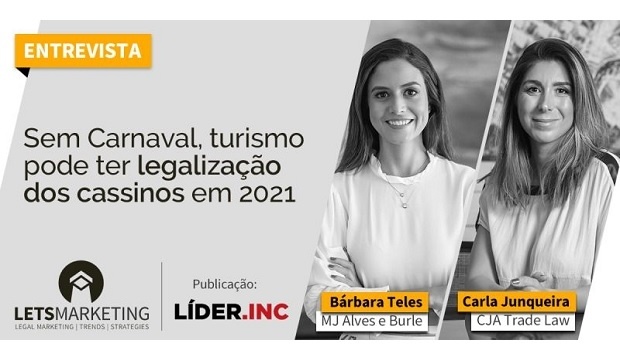 Much is said about the estimate that the revenue from casinos and their exploitation can reach billions of reais. Still, a subject always discussed on the subject is related to the generation of a large number of direct jobs, both in the construction and renovation phase, and in opportunities during the operation of these complexes. All of this, not to mention the attraction of capital, which would be one of the biggest reasons for allowing casinos to operate in Brazil today.

Supporters of the liberalization of casinos in Brazil argue that the generation of jobs and the estimated tax revenue could fund social programs in 2021 without hurting the spending ceiling, in addition to serving as a factor in attracting international investments in the so-called ‘integrated resorts’.

This issue gained prominence when Bill 4495/2020 was processed and received a favorable opinion from the Regional Development and Tourism Commission (CDR). This Bill is added to four others that, with different texts, defend the legalization of games of chance in Brazil.

According to lawyer Carla Junqueira, a specialist in international trade, “the legalization of casino games within 'integrated resorts', followed by a concession process for exploration, could attract large investors to the Brazilian tourism market, boosting economic activity in all regions of Brazil.”

On April 7, the Federal Supreme Court (STF) will analyze the possibility of exploiting gambling. This is a judgment within the scope of Extraordinary Appeal (RE) n. 966.177, which will decide on the typical conduct of gambling exploitation in view of the Federal Constitution - if such activity was received by the Constitution and, therefore, it is considered a criminal offense. This is because the Criminal Misdemeanor Law is dated 1941, while our current Federal Constitution, dated 1988.

The theme was included as General Repercussion. That is, their decision will have a direct impact on other processes that have a similar theme. Therefore, there is an effect on social, economic, and political aspects.

The expectation of positive changes, if the Supreme Court decides not to criminalize the exploitation of games of chance in the country, moves the market as a whole. This will make it possible to resume discussions about revenues from the activity, the direct economic exploitation of the market, the incentive to tourism through exploration and new investment options (national and foreign).

“Today, we are going through an economic crisis, mainly due to the ongoing pandemic, which may be aggravated if the State does not have enough resources to pay for public accounts and make the necessary investments to face the consequences,” points out lawyer Bárbara Teles, Government Relations specialist.

The gaming market can be seen as an expansion of the state's revenue list - as long as governance and public health rules are allied. The opening of this market brings positive gains for the tourism sector, one of the most impacted by social isolation.

The tourism sector had a strong retraction, and, despite the government's efforts, the perspective is that the impact will continue for some years. One example was the cancellation of Carnival in 2021, considered one of the main parties for the sector.

There are Brazilian cities that depend directly on the Carnival for the support of different segments, which was not possible this year. In addition to the world-renowned cultural aspect, Carnival is highly profitable for the local tourism sector, responsible for generating a huge amount of income, increasing the hotel sector, expanding national travel, moving the economy of local cities, adding or supporting restaurants, among other sectors directly impacted. In the states of Pernambuco and Rio de Janeiro, for example, the increase in the economy in this period annually exceeds the billions in revenue.

“Thus, in the face of great economic wear and tear, one of the ways out for the tourism sector is the possibility of implementing casinos in the country. The structures of these large complexes can enhance less developed areas, expand the source of revenue and enhance tourist structures in Brazil,” says Bárbara Teles.

The exploitation of gaming in Brazil and the possibility of implementing casinos, when legalized, can be economic drivers for revenue movement, impacting jobs (existing and to be created) and attracting important investors to the country. “With due legalization, in order to provide legal security, governance rules and prevention of public health and criminalization, it will be very beneficial to the country,” says Carla Junqueira.

Bárbara Teles also points out that “one cannot simply veto this debate because of hypothetical restrictions. It would be like someone wanting to ban a car race because accidents can happen. The focus of the debate should be on the solution, not just the problems.”

How was the ban on casinos in Brazil?

At the time when casinos were banned in Brazil, in 1946, overnight, the country stopped operating its large gaming venues and, consequently, there was no more revenue from betting and casinos. The economic impact was even more felt in Brazilian cities that had tourism as their main means of survival, such as in Petrópolis, in Rio de Janeiro, and in Poços de Caldas and Lambari, in Minas Gerais. Until today, a large Brazilian public travel internationally to have access to the infrastructure of integrated casinos and resorts outside the country.

With regard to gambling, the Brazilian Legal Gaming Institute (IBJL) estimates that illegal betting in Brazil totals R$ 18.9 billion, which does not have a percentage reversal for public coffers due to the non-legality of such modalities. In the same vein, the Institute indicates that the activity can raise about R$ 20.4 billion per year in taxes and tributes. This estimate includes all types of modalities, but, nonetheless, it calls attention to the large revenue generated by the exploitation of games, at a time when the country needs revenues to rebuild after the crisis.

Casinos have a direct impact on encouraging tourism in important regions - mainly luxury tourism, which could generate large sums to public coffers.

Can casinos be legalized again in Brazil?

With the great economic impact resulting from the COVID-19 pandemic, the Brazilian budget needs to be reevaluated and optimized. One of the ways to increase revenues is the possibility of implementing casinos in the country, investments that have already had favorable expressions from large national and international economic groups. The attraction generated by the reinstatement of casinos in Brazil will demonstrate an increase in revenue for the public coffers and will also include the country in international routes, conquering a new audience of tourists.

Despite facing resistance from the more conservative benches in the National Congress, the possibility of recovering the theme and legalizing the operation of casinos in the national territory has been discussed by the government, by important parliamentarians and measures were taken to include the theme on the governmental agenda.

Through Decree 10,349, of May 13, 2020, the Presidency of the Republic instituted an Interministerial Committee with a view to studying regulatory alternatives for the promotion of private investments in the Brazilian tourism sector. With such a measure, the government seeks the implementation of new ventures and tourism use of natural and cultural assets in Brazil.

The intention with the release of casinos is that investments can be resumed (domestic and foreign) from the establishment of these ventures, which can generate revenue around accommodation, travel (sea, as cruises, inclusive) and incentive to certain states for expansion visitation based on the attractiveness of tourist activities.

Of course, one must think responsibly about the topic. The implementation of casinos and even the legalization of certain types of gambling in Brazil should provide for good and clear rules for the prevention of financial crimes and public health care, linked to good international practices that can serve as a reference for advancing the theme.