In a pioneering initiative, Clube Atlético Mineiro announces an unprecedented agreement in Brazil with Sorare, a global football fantasy game. Fans around the world can now buy official digital cards from the club players and use them to scale their teams, competing for prizes in various domestic leagues. The initiative contributes to the internationalization of the Atlético brand and is another step of the ‘Rooster’ -as it is known in Brazil- in the universe of blockchain technology and NFTs (non-fungible tokens), which are on the rise worldwide. 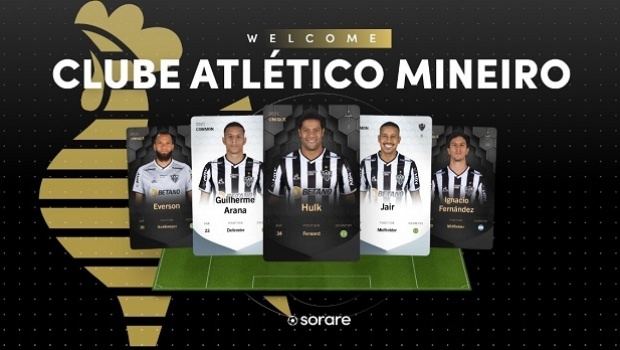 Atlético joins clubs such as Real Madrid, Liverpool, PSG and Juventus on the platform that has more than 130,000 active monthly users and, in March 2021, generated more than US$ 28 million in card sales, in 140 countries.

Each player in the squad will have four types of cards issued: single (only one unit), super-rare (10 units), rare (100 units) and common (unlimited).

All cards will be sold through auction, on the Sorare platform (sorare.com), with initial minimum bids of US$5 (rare), US$50 (super rare) and US$500 (single). Common cards are free and work only for users to test the platform.

The initiative contributes to the internationalization of the Atlético brand and is another one of the ‘Rooster’ in the universe of blockchain technology and NFTs (non-fungible tokens), which are on the rise around the world.

From now on, Sorare users will be able to collect digital cards from Atlético’s athletes, such as stars Hulk, Nacho Fernández and Matías Zaracho, among others. At Sorare, in addition to the collection, virtual cards can also be used in a game similar to the famous Cartola FC, in which the athletes' real performance equals points in the game. On the blockchain platform, however, the team is scaled with the NFTs that each user has in their personal collection.

This mechanics makes the cards have a dual function and more variables on their price. In addition to the scarcity issue, which makes a NFT with a shorter run more valuable due to its rarity, at Sorare cards may also be worth more depending on the player portrayed and the platform users' interest in having him on their team.

Plínio Signorini, CEO of the club, says that Atlético is very pleased to start this partnership with Sorare to further expand its brand worldwide and offer fans the chance to collect cards of its players: “We are the first Brazilian club to join the Sorare platform, which confirms our focus on innovation,” he says.

Nicolas Julia, Sorare's CEO, points out that the platform has been building a gaming experience fueled by passion, where fans can connect with football and a global community: “At Sorare, they can really own the game,” he says .

"We are proud to launch in Brazil with Clube Atlético Mineiro and have them on the platform to allow fans from around the world to connect with their players in the coming years," he says. “We were very impressed with the growth of the Brazilian community at Sorare.”

Founded in 2018, Sorare was created by football fans for football fans. Through digital collections on the blockchain and its global football fantasy game, the company has a mission to become "the game within the game".

Sorare is transforming online sports fan bases and offering its community a new way to connect with the clubs and players they love. The platform had a monthly card sales volume of more than US$28 million in March 2021 in 140 countries.

Based in Paris, Sorare is funded by a world-class team, including Benchmark, Accel Partners, e.ventures and athletes such as Gerard Piqué, Antoine Griezmann and André Schürrle.