Against the conservative discourse that video games are harmful to young people, AfroReggae saw in electronic modalities a real potential to socially impact poor communities in Rio de Janeiro. The first step was taken with the AfroGames project. It is the first training center located in a community in Rio, more precisely in Vigário Geral. The goal is to train and professionalize young people from the slum (favela) to work in the electronic competition market. 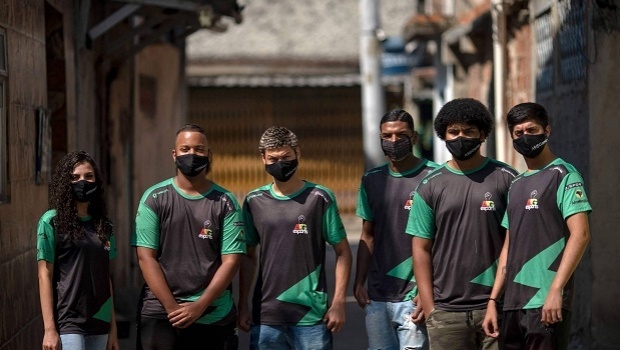 Luiz Augusto Jr.'s life, 23, changed radically three years ago, when the former bricklayer assistant started to produce content related to electronic games in Vigário Geral, a community where he lives in the north zone of Rio de Janeiro with high rates of poverty and violence.

Thanks to AfroGames, an innovative project for inserting electronic sports in needy areas, Luiz Augusto receives an aid grant to be in charge of his own internet video channel, where he presents himself as "AFG Sr Madruga" and plays Grand Theft Auto ( GTA), one of the most popular action games in the world.

“I started playing at a lan house here in the community, and I spent a good part of my salary. When I went to AfroGames, my grandmother and my mother said that it was impossible to earn money from video games, but they supported me," recalls Luiz Augusto, the first streamer of the project developed by AfroReggae, an NGO created by residents of the community itself 28 years ago that promotes inclusion and social justice through art and education.

In an exclusive room at the institution's headquarters in the ‘favela’, AFG Sr Madruga and 100 other young people served by the project have at their disposal the best in computer gamers and audio and video equipment, in addition to the guidance of professionals specialized in this entertainment sector, which will accumulate US$ 180 billion in revenues this year, well above the US$ 74 billion foreseen for the music and cinema industry, according to the consultancy Newzoo.

"Today, I am recognized by the residents and I want to become a content producer, a digital influencer. And here I am learning about it", said the young man.

'GAMES ARE THE NEW ROCK'

"When I was younger, kids got together to form a rock band. Today, they get together to form an eSports team. Games are the new rock'n roll," says Ricardo Chantilly, ex-entrepreneur in the music field, creator and one of the directors of AfroGames.

On the birth of the project, Chantilly recalls that he was already a friend of AfroReggae directors, José Júnior, NGO's CEO, and William Reis, current coordinator.

"They wanted a project in the music field, but I said that the path was eSports and game development. I agreed to show them an idea," he says. In the presentation, which contained images of international and national championships of electronic games in crowded gyms, a detail caught the attention of the NGO's directors: there were no black people among the public and teams participating in the competitions.

"We realized that we were not represented in those images. That's why we said: 'why not assemble a team from the favela?", recalls William Reis, raised in Vigário Geral and who is part of the 55% of Brazilians who declare themselves black or brown.

Thanks to the support of private companies, the initiative started in May 2019 offering courses in game programming and English, in addition to assembling its first team of League of Legends (LoL), a battle game whose world championship held that year distributed US$ 2.22 million in prizes.

With six members, who receive a minimum wage (R$ 1,100) each, the AFG eSports mixed team has professional infrastructure to train, with cutting-edge equipment, in addition to a technician, psychologist and physical trainer.

"We train from Monday to Friday. And we also have English classes," says Gabriela Evellyn, 19, known as "AFG Haru", the only girl on the team.

"In the game, there is no difference in being a woman. But, when someone makes fun of me, I try harder to defeat him and say in the end: 'See, he lost to a woman'", she says.

Due to the pandemic, AFG eSports did not participate in any championship in 2020, but this could happen later this year, and it could be in an event organized by AfroReggae.

"We will soon open a nucleus in the Cantagalo community (in Ipanema, south of Rio). There we will have an eSports arena, where we intend to organize the first championship between teams formed by favela residents," reveals Reis.

As in electronic games, AfroGames continues to pass the stage, overcoming challenges and providing opportunities for young people from needy communities to become professional within the millionaire world of eSports.