The Conmebol Disciplinary Court opened proceedings against Flamengo to investigate the use of the club's sponsors' brand in posts related to Libertadores on social networks. Competition regulations prohibit this, which in article 6.3.3 deals with 'ambush marketing'. Two out of three denounced posts correspond to sportsbook Sportsbet.io, sponsor of Fla, which used Twitter and Instagram for campaigns prior to the club's debut against Velez. 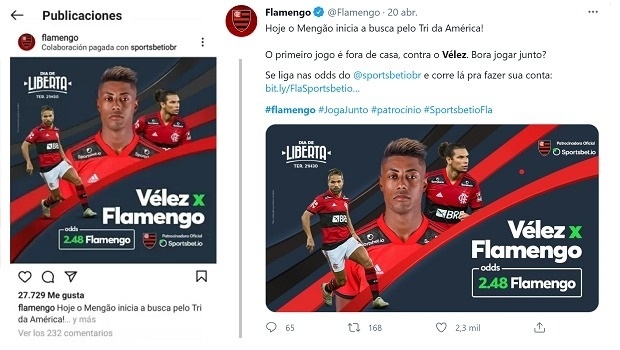 It is not allowed to associate club partners in any mention of Conmebol tournaments, especially those companies that operate in identical segments, which occurred in the posts included in the open process to which the column had access.

The three denounced posts were related to Flamengo's debut at Libertadores, on April 20:

Conmebol has ten sponsors for Libertadores, two of them from the same segments as the partners exposed by Flamengo on its social networks: Betfair (online betting) and Santander (bank).

As journalist Rodrigo Mattos showed on his blog, Conmebol's ban on using sponsors in posts or actions linked to Libertadores has irritated most Brazilian clubs. There is also a recommendation not to hide Conmebol's partner brands, which the participants avoid complying with since they have contracts with other companies.

If Flamengo is convicted, it will pay a fine of US$ 50 thousand, an amount that is removed from the quota of US$ 3 million transferred by Conmebol in the group stage. In the event of a repeat offense, the penalty doubles to US$ 100 thousand, and may reach US$ 150 thousand from the round of 16.

Ambush marketing is a strategy in which companies associate themselves with a specific sporting, cultural, musical or social event looking for a connection without, however, being sponsors or having official expenses.

In addition to Flamengo, six other Brazilian teams are in the group stage of the Libertadores: São Paulo, Palmeiras, Santos, Inter, Atlético-MG and Fluminense. In the Copa Sudamericana, which have the same rule but with different sponsors, seven other Brazilians participate in the groups stage: Corinthians, Grêmio, Atlético-GO, Atlético, Bragantino, Ceará and Bahia.