The Ministry of Economy's Secretariat for Evaluation, Planning, Energy and Lottery (Secap) will organize next Friday (23) from 10:30 am to 12 noon, the panel 'Sports betting, a great opportunity for the country' with the participation of Ludovico Calvi, President of Global Lottery Monitoring System (GLMS), Ricardo Magri, Commercial Director of Eightroom, and moderation by the Secretary of the area, Gustavo Guimarães. The event will take place through the Microsoft Teams platform with prior registration. 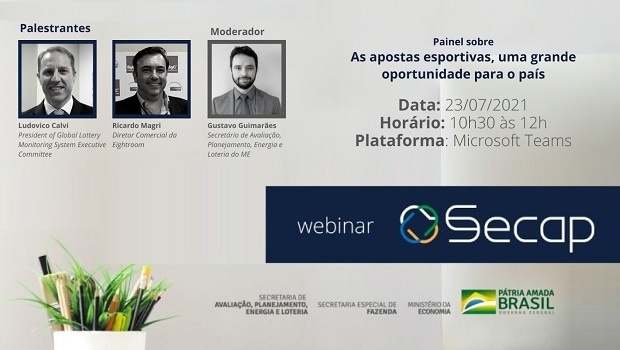 Recently, Calvi (Advisor, Lottomatica - Italy) was reappointed President during the GLMS General Assembly for his third term. With Brazil in the midst of a sports betting regulation process, one of the most discussed issues is that of integrity and transparency in the market. “The regulation of the activity is a tool to prevent the entry of money that could be the product of corruption. At GLMS, we are in favor of creating a regulatory framework that guarantees the competitiveness and sustainability of the gaming sector, in a safe and controlled environment,” says Ludovico, anticipating his participation in the panel.

For his part, Ricardo Magri is a specialist in integrity, transparency and security in the sports betting market. He was director of business development in Latin America for Sportradar for six years. Today, Magri is the Commercial Director of the company Eightroom in business development for LatAm, with a focus on the Brazilian market.

The Brazilian fixed-quote sports betting market enters a new phase with the presidential sanction of Law 14.183/2021 last Thursday (15). The new law changes the taxation and distribution of the collection of these bets, in virtual and physical means. Secap/ME's expectation is that the new legislation will allow Brazil to align itself with the best international practices and lead to an increase in tax collection for the public coffers, unlocking a promising market for the country.

Specialists will debate about the great expectations that the Brazilian market arouses in the world and the flood of bookmakers that have arrived in the country with investments, sponsorships and other brand actions that demonstrate the interest that exists in this growing business. The event will also serve to learn from the very mouth of the Evaluation, Planning, Energy and Lottery Secretariat on the advances in the regulation that is expected to be defined this year and implemented in early 2022.

The change in Congress is in line with what Secap was discussing with the market, international regulators and potential investors, as, despite the 2018 Law having authorized the modality in Brazil, taxation was far from best international practices.

"Law 14.183/2021 will allow the regulation of the market and the fight against the illegal market, which does not pay taxes, in addition to the increase in revenue and the country's alignment with best practices worldwide. Major international players have already sought out Secap interested in establishing themselves in the country,” emphasizes the head of the Secretariat, Gustavo Guimarães.

“With this change in the legal basis, Brazil could be one of the great world markets for this type of betting,” says the Undersecretary of Prizes and Draws at Secap, Waldir Eustáquio Júnior. The Secretariat's expectation is that the regulation of the modality takes place until 2022 – the year of the football World Cup –, with the beginning of the due bidding processes.

Fixed odds betting, better known as sports betting, is a lottery in which the player tries to predict results in real sporting events, such as the score, number of yellow and red cards, goal authors and times, player substitutions, in football games and other sports. The bettor already knows, at the time of betting, how much he can win in the event of a hit, by applying a multiplier – the fixed quota – of the bet amount.

Law 13.756, of December 12, 2018, established this modality as an exclusive public service of the Union and with commercial exploitation throughout the national territory. This lottery activity has been explored in the country virtually by foreign companies, with an estimated turnover of around R$ 2 billion a year. This amount is remitted outside Brazil.

This change brought about by the new law aligns Brazil to the way of distributing the collection of fixed-odds bets globally, favoring the emergence of a larger and more competitive market, contributing favorably to the ongoing privatization process, within the scope of the National Program of Privatization (PND).

The total collected will be used primarily to pay the prizes, the income tax (30% for prizes above the exemption limit) and the social security portion (0.10% for bets on physical media and 0.05% for those in virtual environment).

Once this is done, the remainder will be allocated to public schools in Kindergarten, Elementary and High School levels that have achieved the goals established for the results of the national assessments of Basic Education (0.82%); the National Public Security Fund - FNSP (2.55%); to clubs that cede the rights to use their names, brands, badges, anthems and symbols for the dissemination and execution of the lottery (1.63%), and to lottery operators (95%, at most), to cover the expenses of costing and maintenance.