Tokyo Olympics: 20 million Americans to wager on this year's games

According to the American Gaming Association’s (AGA) first-ever survey on Olympics betting expectations, 20 million Americans plan to bet on the Tokyo Olympics. Since the last Games in 2018, when legal sports betting was only available in Nevada, sports betting is now legal and live in 21 states and Washington, D.C., giving more than 100 million Americans access to the legal market. Regulations on Olympic wagering vary by state. 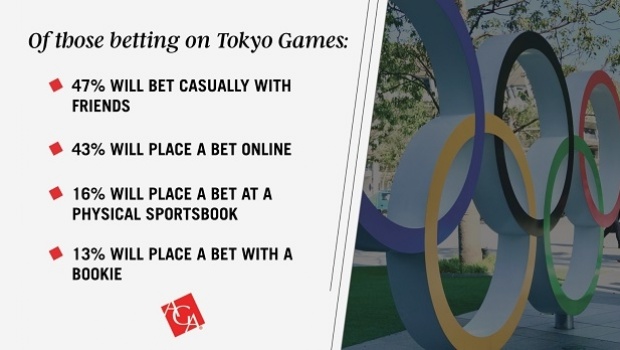 With the belated 2020 Tokyo Olympic Games to begin this week, the American Gaming Association has compiled a number of statistics indicating that interest in the event among American bettors is high.

AGA has stated that 54% of Americans are interested in the Olympic Games and 20.1m, or 8% of the nation's adult population, plan to wager on the global sporting event.

Of the Americans who plan to place bets, basketball is the most popular, with 45% of bettors planning to wager on a game. Soccer follows closely behind at 34%, and gymnastics at 28%. Track and field and swimming both sit at 27%.

Betting is most popular among casual players. According to the AGA, 47% of those who plan to wager will do so casually with friends, and 43% of bets will be placed online, while only 16% of people plan to visit a physical sportsbook. Furthermore, 13% of those who said they would wager on the Olympics say they will visit a bookie.

In addition, 10% of Americans who don’t currently live in a state with a legal and regulated sports betting market said they would be interested in wagering should their states legalize the activity.

Since 2018, when legal sports betting was only available in Nevada, 21 new states, as well as Washington, DC, have launched regulated betting markets.