Betsson registered record-high profit in the second quarter of 2021 of €33.0m, thanks to growth of sports betting and expansion in Latin America. However, the operator also revealed that its US launch would be delayed until early 2022. “The second quarter is proof of the strength of our business model. We have achieved an all time high profit based on our scalability and geographic spread,” comments firm’s CEO Pontus Lindwall. 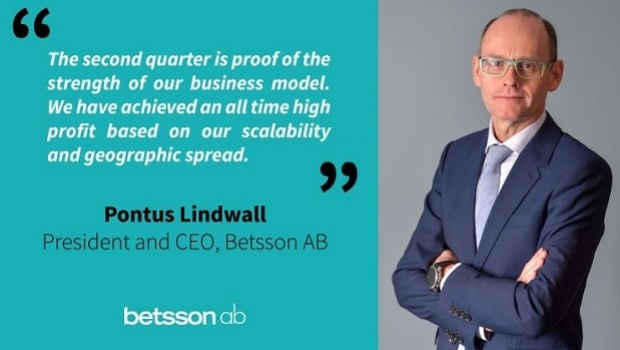 Betsson Group has reported a 14% year-on-year increase in revenue to €171.2m for Q2 2021. The operator’s online casino segment made up 70% of Q2 revenue despite a 5% annual drop amid a tough comparative period due to the rise of online gaming at the height of the pandemic. Sportsbook revenue performed strongly, rising 125%…

Betsson CEO Pontus Lindwall said high sports betting revenue was the main reason the operator was able to record record profit, as not only did the vertical bring in extra revenue, but operating margins for betting tend to be higher.

“Important reasons behind us being able to reach an all time high profit are the strong sportsbook activity, primarily driven by the football tournaments, high sportsbook margins, and positive gross margin effect as a result of a larger share of total revenue coming from the sportsbook,” Lindwall said.

“The second quarter is proof of the strength of our business model. We have achieved an all time high profit based on our scalability and geographic spread,” he added.

When considering performance by region, the the operator expanded significantly in Latin America during the quarter.

“Betsson is now the market leader in Peru and in Brazil a marketing campaign has gone viral by a sponsorship of the ‘world’s worst’ football team,” Lindwall said. “Betsson was also the official regional sponsor of CONMEBOL Copa América, which contributed to strong growth in new active customers in the region during the quarter.”

Looking ahead, Lindwall mentioned the operator’s plans to launch its Betsafe brand in the US, starting with Colorado. He said that as the operator plans on using the Strive platform – in which it acquired a 35% stake in April – rather than one that is already certified, its launch would be pushed back. Rather than launching in the second half of 2021, Betsson now intends to launch the brand in Q1 of 2022.