Proma, organizer of Expotel, the most important hotel fair in Brazil, organized this Wednesday (21) the webinar ‘Casinos and Gaming in Hotels and Tourism’, with its president José Sevieri moderating the debate by Bruno Omori, president from IDT-Cema, and Luiz Felipe Maia, from the FYMSA law office. They focused on the development of the hotel sector from the implementation of urban casinos, casino hotels and in Integrated Resorts. For the panelists, the model of casinos outside mega-resorts would be the most attractive for the country. 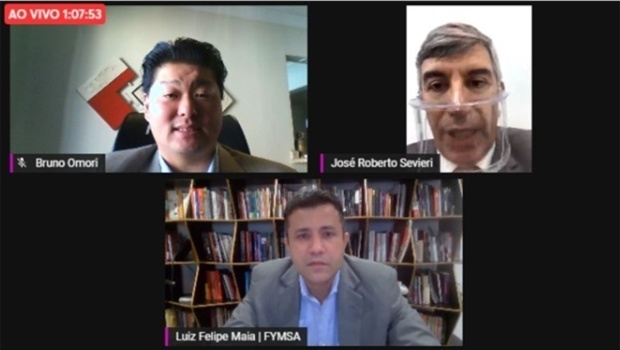 Much is said about legislation that contemplates the implementation of large casino projects in integrated resorts, and the webinar held by Expotel highlighted the importance of the activity for Brazil. But the focus was not restricted to mega resorts, "which can attract billions of dollars in investments from large business groups," as Bruno Omori pointed out, but also to other models, such as European or Latin American-style hotel-casino and urban casinos, as well as bingo and sports betting rooms.

For the president of the Institute of Development, Tourism, Culture, Sport and Environment, restricting casinos to large enterprises in integrated resorts “will cause only four or five structures to be implemented in Brazil, especially in the most important urban centers, such as São Paulo, Rio de Janeiro, Minas Gerais, Brasília and, perhaps, one in the Northeast.”

For Omori, the European and Latin American model, with a casino integrated to a well-structured hotel, with more than 150 rooms, can enable regional development and strengthen local tourism. “There is great potential for the hotel sector with the approval of casinos, and it needs to be as comprehensive as possible, to work not only in large integrated resorts, which may involve investments of billions of dollars, but also urban casinos and hotel casinos, such as takes place in Europe and some countries in Latin America. With 150, 200 or 300 rooms, many cities could receive hotel-casino, which would increase the economic activity of the destination, strengthening the hotel revenue and the productive chain of a city,” commented Bruno Omori.

According to him, Brazil needs to encourage and guarantee the hotel industry a leap in economic development with the opening of other gaming verticals to strengthen Brazilian tourism, considering, in addition to integrated casinos and hotel-casinos, urban casinos, bingos and sports betting in a physical environment. “All of this can promote the regional destination,” he said. For Omori, even the installation of online casinos and sports betting could be associated with hotels, since “it would be very interesting to see a space for sports betting in a hotel lounge bar and even create spaces for online betting in a pleasant restaurant of a hotel enterprise.”

Luiz Felipe Maia, a lawyer and partner at the FYMSA law office, addressed issues related to the current stage of the legislation, which is discussing the regulation of sports betting. In his explanation, he highlighted that although the activity is already present in the life of Brazilians, it needs regulation to offer legal certainty to operators and transparency and guarantees to bettors.

Attentive to the movements in the National Congress, Maia cited the discussions in the Brazilian parliament around four projects that deal with the approval of a legal framework for the gaming sector in the country, "but there is a lack of a more marked presence of the hotel sector among those who defend the activity, since it is one more tool to strengthen the hotel industry.”

For Maia, “it doesn't make any sense for Brazil, a democratic country, not to have regulated gambling. There are very few countries in the world, like Muslims and some dictatorships, that are not aligned with a regulated betting activity.”

Maia highlighted the growth of sports betting, operated by companies abroad, which are still in the regulatory phase, while bingo and casinos are banned. “We are on the way to sports betting, in the hands of Secap, the Ministry of Economy, and Congress is discussing the implementation of casinos, which has not yet defined the model we will have in Brazil. It is not yet known if it will be the Las Vegas model, with large projects with a hotel, exhibition center, shopping center and the casino as an additional accessory, or if it will be the casino model not linked to hotels or even the casino linked to hotels, as happens in Europe,” he described.

The lawyer commented that there are many interested in investing in Brazil, both in resorts integrated with casinos and in the model without IRs. "What makes the difference, in this case, is the investment to be made and the demand must be respected, as large integrated resorts with casinos in all states cannot be accommodated; but a more flexible model can attract smaller investments and reach places where we already have well-structured hotel,” analyzed Maia.

“The most open vision we see is that of Senator Angelo Coronel, that all verticals must be authorized, not to privilege only the casinos in integrated resorts, which could be very positive for Brazil,” he added.

According to Maia, the sector is optimistic about the possible change in the head of the Civil House. “Senator Ciro Nogueira, author of Bill 186 of the Senate, is in high demand for the position of Minister of the Civil House. This could be a catalyst in this entire process. If this change happens, it will be the time for everyone involved to make efforts to try to get the project back on the table,” he stated.

Still, according to the lawyer, approval will not be easy, “because there is a lot of resistance from some sectors of society, especially due to the strength of the evangelical bench and these are issues that the government does not usually spend political capital to make progress.”

"Among the bills under discussion, the most suitable is Bill 186/14, which has fewer specific requirements and would allow for the adaptation of spaces for the gaming area and, in my opinion, could be embraced by the hotel sector to contribute with the advances in the approval of a gaming law for Brazil, which would bring wealth to the country and a great incentive for the hotel sector,” said Maia.

Finally, he also commented that it is necessary to end prejudice against the activity. “There is a lot of ignorance about the issue of money laundering and how to avoid such action in a casino. There are many mechanisms to curb this and in evolved markets we see very well how this control is done. Another question is about gambling addiction. It exists, but around the world it is very small (about 1%) and all operators work to avoid it. Casinos have serious responsible gaming policies and adopt measures to curb gambling by people at risk for this disease."

At the end of his presentation, Luiz Felipe Maia said that “now is the time for a collective effort to achieve legislation for a gambling law. Now is the time to put the team on the field, talk to their representatives and gain approval for the activity.”