Betsul incorporates PIX into its platform for easier and faster betting

Now, playing at leading sports betting site in South America Betsul (betsul.com) has become even more practical and faster with payments via PIX. In a few minutes the credits are already available to guess even in that event that is just about to start. Users can also take advantage of the July Awarded promotion to earn up to R$150 bonus on their deposit and even win an official shirt of their football team of heart. 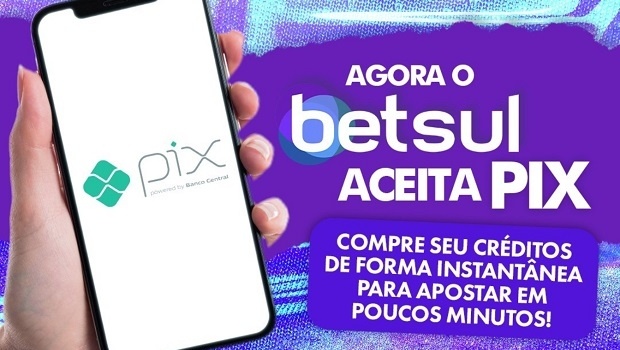 From now on, PIX is part of the payment methods adopted by Betsul to make life easier for its customers. The bookmaker has incorporated the bank transfer system into its modern sports betting and gaming platform. A little over seven months after its launch and developed by the Central Bank of Brazil, the PIX currently accounts for around 70% of bank transfer transactions.

According to the Central Bank itself, the PIX already accounts for more than 50% of banking transactions carried out in Brazil. The rapid development and vast popularity of the payment system surprise even information technology (IT) technicians.

PIX betting is certainly the new norm in the Brazilian online betting market. Bookmakers customers can now make instant deposits in order to bet on a match to be played on the same day or even on a game already in progress. Using PIX, the player can make an instant deposit during the match, place their bet in real time, and even request the withdrawal via PIX, receiving winnings obtained with the bet immediately.

Betsul is today the sports betting site that prints the most uniforms of Brazilian professional football. In addition to the series A teams, the brand also supports CRB, Joinville and Ponte Preta. The current Paulista Men's Volleyball Champion, Volei Renata, is also a partner of the company.

The arrival of PIX adds up to the celebrations of its second anniversary, which brings great news and investments. The brand celebrates the sponsorship of five of the 20 teams that compete in the Serie A of the Brasileirão tournament (Ceará, Chapecoense, Fortaleza, Grêmio and Internacional), in addition to the launch of a new lottery section (with the modalities Mega-Keno, Seninha, Quininha, Super Time and Loteria Instantânea) and the success of Jogo do Bem, the philanthropic arm of the company that donated more than R$240,000 to institutions that support the sport in the country.

Betsul is one of the best sports betting sites in South America, developed to meet the most demanding players and fans. The site offers a simple, intuitive and safe interface for bettors to have fun at their leisure from various betting modalities and an extensive list of sports.

With the idol Falcão, the greatest futsal player of all times, as brand ambassador, Betsul also represents the Brazilian arm of Gambling for Change, an organization that intends to revolutionize the sports betting market around the world.