After Paulistão and Ceará

The Goiás Championship 2022 starts this Tuesday (25) and the latest news was revealed this Monday morning (24). At the headquarters of the Goiás Football Federation (FGF), President André Pitta revealed the new naming right of the competition, which will officially be called Campeonato Goiano 1XBET 2022 and will have the broadcast of all matches of the competition. The international bookmaker is growing strong in Brazil and, in addition to Goiano, it is already a sponsor of Paulista and Cearense championships. 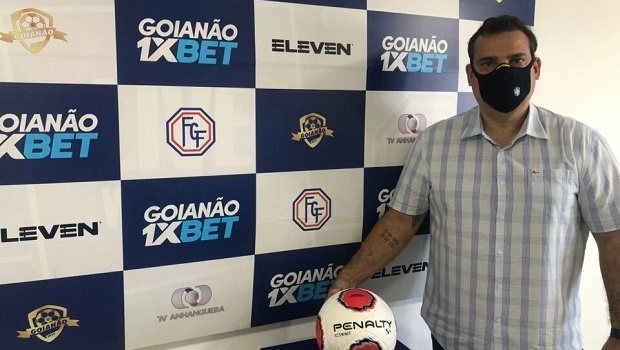 The Goiás Championship 2022, officially Goianão 1XBET for commercial reasons, was presented to the press this Monday morning (24) by the Goiás Football Federation (FGF). The tournament, which starts this Tuesday (25) with the match between Vila Nova and Goiatuba at the Olímpico Stadium, at 19:30, will have a different face this season.

The main novelty is related to the sale of the championship's naming rights, acquired by 1XBET, a sports betting company based in Cyprus. The online gaming site has a strong presence in the sport, with several sponsorship deals in European football, such as Serie A, the first division of the Italian Championship.

Present in more than 130 countries, the new sponsor also supports the Paulistão and Cearense championships, the Brazilian eSports team MIBR and some of the main sports organizations and teams in the world, including Barcelona (Spain), Olympique Lyonnais (France), the Spanish League and all ESL tournaments around the world.

In an interview with reporter Paulo Massad on Sagres TV, André Pitta, president of FGF, highlighted that “it is a sponsor that has come to add even more to the Goiano Championship, and that comes together with the others to cover various expenses of the competition. These expenses would mostly be the responsibility of the clubs, which will be able to focus even more on hiring athletes to make a good competition technically.”

Another highlight is that all 74 games of the tournament will be streamed through Eleven Sports, free of charge. On open TV, the broadcast will be the responsibility of TV Anhanguera, with games on Saturday afternoons. The manager celebrated the fact that, “for the first time, the championship will be 100% broadcast and with full visibility.”

“I hope that we can make good broadcasts and that it bring visibility, so that in the future we can make this a financially attractive business for clubs, both in search of a pay-per-view through this platform, as well as in the appreciation of the sale of sponsorship, with the clubs being able to say that they will have all the games broadcast,” highlighted André Pitta.