Rafael Nadal's presence in Brazil will bring to the public of Belo Horizonte much more than a tennis match of one of the greatest legends of the sport. Master sponsor of the event, Esportes da Sorte prepares a series of activations for the attraction, which will be held in Mineirinho. The match is part of a tour of the Spanish tennis player around the world and will be against Norwegian Casper Ruud. 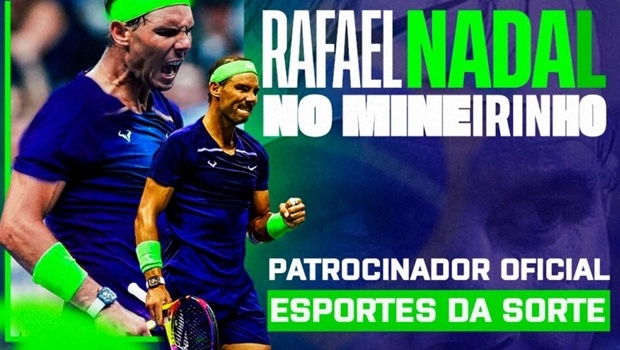 Among the actions prepared for the game, which will take place on the 26th, are scheduled the printing of Polaroid photos, distribution of gifts, photo 360°, presence of an animator at halftime and a post-match activation with balls signed by Rafael Nadal. Wolff Sports was hired by the bookmaker to plan and execute the activities.

" Esportes da Sorte is made by passionate about the sport. That way, there was not an option we could stay out of Rafael Nadal's arrival to Brazil. We know how unique and remarkable this event is. That's why we're working with partners to provide an unforgettable experience to the public," said Daniel Trajano, commercial director of Esportes da Sorte.

"An event like this is a great opportunity for the master sponsor to connect with the fan. By actively acting with a major world sports star, we can create, through actions, a true connection that will bring a positive impact to the brand," notes Fábio Wolff, managing partner of Wolff Sports.

Despite being an exhibition match, the confrontation between Nadal and Ruud promises to be of a high level. The Spaniard's opponent has a history of records, having been the first Norwegian to win an ATP.

In addition, the challenger also reached second place in the world ranking in September this year, a position never reached by someone from his country. Altogether, he has eight career titles, including triumphs at Roland Garros, Wimbledom and US Open.

The last time they faced each other, last November 17th for the ATP World Tour Finals, the match was exciting. Despite Nadal's 2-0 win, it was decided in busy partials: 7-5 and 7-5.

During the event, Esportes da Sorte will also be represented by influencer Alê Oliveira (@aleoliveiracm).