The interesting video bingo ‘Imortal Romance’, released last week by Neko Games, has excellent appeals that should place it among some of the most successful games in this first semester and leverage the Argentine game studio, based in Buenos Aires. The company teamed up with Microgaming to create a version of this mega-hit aimed at Neko's bingo solutions. 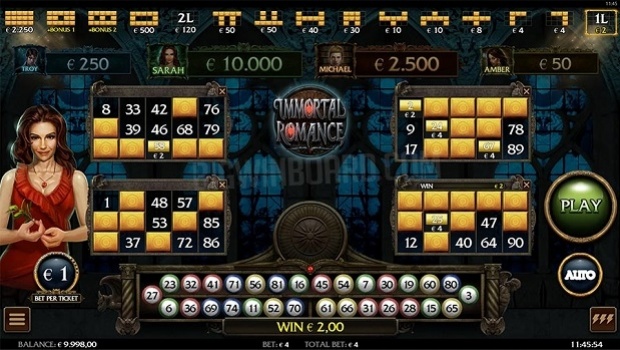 In the beginning, there's a lot of stuff happening on the screen. Up to four bingo cards are displayed, below the jackpot values, a row of winning patterns and the user interface. Despite the extra information, the game retains an ‘Immortal Romance’ spirit due to the dramatic soundtrack and gothic imagery. In addition, by clicking on the character, it is possible to choose Amber, Troy, Michael or Sarah to keep company during the games.

Although the customer can buy from one to four cards, in order to reach the jackpot, it is necessary to buy all of them. Interesting is the 55.93% hit rate, although not a money printer, yielding an RTP of 95.13%.

After purchasing the cards and setting the bet, the customer simply presses the play button to release a random lot of 30 balls. If the numbers on the tickets create a predefined pattern, the associated prize is awarded. There are 15 possible pattern types, ranging in value from 2x to 2,250x the individual ticket price.

If after the initial draw of 30 balls there is a chance to win 8x the ticket or more, the Extra Ball Stage is activated. A gong sounds and several extra question mark icons appear on the screen. Players have the option of pressing the play button to reveal one question mark at a time. The cost to do this is clearly displayed and the newly revealed balls can create new wins. Revealed balls can also contain coins that are collected in the Lion Door Knocker. When the Lion Door Knocker is full of coins, The Chamber of Jackpots feature is granted. 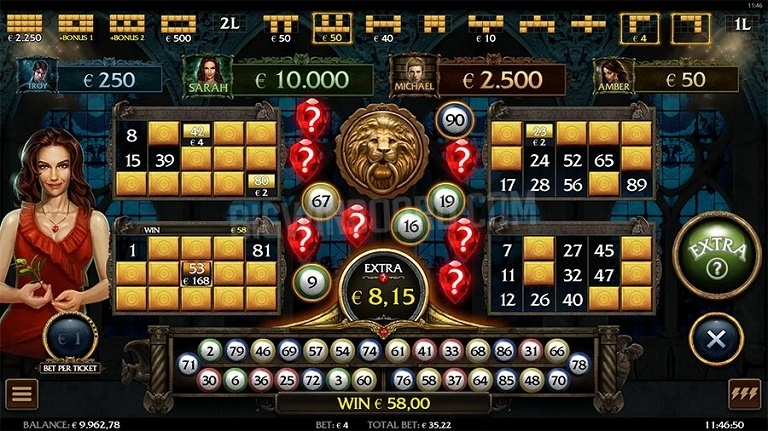 When triggered, players combine three characters to win the associated prize – Amber, Troy, Michael and Sarah, worth 50x, 250x, 2,500x and 10,000x the ticket price respectively. Players will need to play with four cards to activate this feature.

When Bonus Pattern 1 is granted, the Eternal Chambers bonus begins. This is a five level bonus game where players select items. If the item reveals a prize, players earn the amount and move on to the next level to repeat the process. If the item clicked reveals a pickup message or there are no more items to select, players will be returned to the base game.

Occasionally, an Extra Ball will be presented. They are very useful because they allow players to choose the number that has not yet been called on a card.

‘Immortal Romance’ video bingo is a game that has something to offer to all types of players. On the one hand, those looking to stretch a bankroll can do so with low ticket costs and rely on the regular batch of balls to create winning patterns. Or, for those who prefer to live a little longer on the edge, they can head to Extra Balls when the Extra Ball Stage triggers. It can be tempting to squish the extra balls when only one or two numbers are needed to complete a “juicy” kind of pattern. However, the cost of revealing individual balls during this feature can be quite high, so players should beware.

So it can be punitive to buy extra balls repeatedly in an attempt to create a better pattern or trigger the jackpot. However, one good thing about ‘Immortal Romance’ video bingo is that players have a measure of control over the game. Buying the extra ball is completely optional, and players have many options in terms of expenses – bets and number of cards. The only small problem is the need to buy four cards per spin to be eligible for the Chamber of Jackpots. Of course, even with a ticket, there is a chance to win Bonus Round 1 or 2, where solid prizes can be found. However, as players need to cover all but 1 or 2 on one ticket to do this, it won't be easy.

So with the ability to meet a wide range of game requirements, solid prizes, plenty of choices, brand recognition and familiar faces, it's hard to see ‘Immortal Romance’ not making an impact on the bingo segment of the market.