Largest informal settlement in the city

From tomorrow (May 14) to July 2, in Paraisópolis, the largest informal settlement of São Paulo, takes place the BetPix365 Cup, a lowland football championship held by the bookmaker. The event aims to encourage the practice of sports in the community, in addition to leaving a legacy for the region and promoting social actions and donations of basic food baskets. 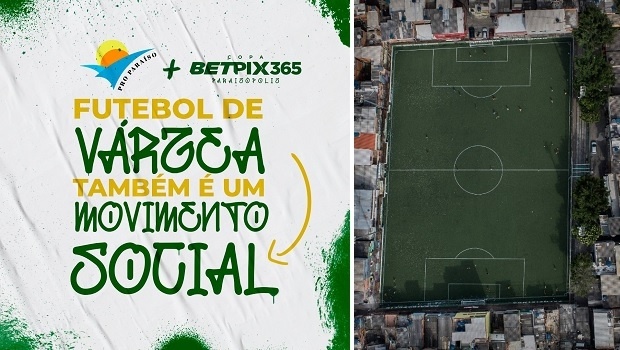 “Brazilian football is what it is thanks to the game played in communities, on the streets, in different regions of Brazil. Encouraging the practice of sport in such an important place as Paraisópolis, where there is plenty of talent and people wanting to play, is an honor for us at BetPix365, who want to get closer and closer to the people and be able to provide great events that make a difference,” said André Rocha, CEO of the bookmaker.

Palmeirinha, which hosts the event, is a sports association that has been operating for 49 years in Paraisópolis and promotes a social football project that currently serves more than 90 children, between 10 and 17 years old. Palmeirinha has nine teams between under-11 and under-17 categories, male and female, that compete in different tournaments. Last year, Palmeirinha won a public notice from the Czech Consulate in São Paulo for its social work and was granted conditions to make improvements to its facilities.

“BetPix365 leaves an important legacy for us, as some teams find it difficult to even have uniforms, as they are expensive today, and it also gives great visibility to our important daily work. It is not just a sponsorship, as they are also helping us with basic food baskets, which are very important, since we are going through a crisis in the country and we have many families in need in our community,” explains Bruno Melo, vice president of Palmeirinha, the main sports association in Paraisópolis.

The BetPix365 Cup will be played by 20 teams and will have financial prizes for the finalist teams. In addition, 400 food baskets will be acquired and donated in partnership with Associação Pró Paraíso, an NGO that operates in Paraisópolis. During the BetPix365 Cup, there will also be graffiti contests, dance and free internet connection distribution. The event will be broadcast live on YouTube on the channel “Várzea ao Vivo”.

This will be the first edition of the BetPix365 Cup and there is already the objective of carrying out other similar events in other communities, always with the aim of bringing entertainment closer to the people and promoting social actions through football.

In the grand final, on July 2nd, the event should have the presence of former athlete Luís Fabiano, ambassador of the BetPix365 team. In addition to the former striker for São Paulo and the Brazilian national team, BetPix365 has in its team of ambassadors Dudu and Bia Zaneratto, from Palmeiras, Adriano Imperador, and Bruno Henrique from Flamengo, in addition to sponsoring Red Bull Bragantino and events such as the Largest São João in the World, in Paraíba.

BetPix365 appears as the most accessible and easy alternative in the segment, with possibilities for withdrawals and deposits below what is usually practiced in the market and without difficulty in operating on the platform, with the ease of transactions via pix.

The site has a wide range of options and, in addition to betting on football, also offers offers within basketball, baseball, tennis, handball, boxing, American football, table tennis, volleyball, beach volleyball, MMA, among others.

BetPix365 values the responsible gaming policy and the entertainment of its customers. Within the platform, tools are available so that the user can have more information on how to maintain their prudent playing style, as well as questionnaires that are intended to help with personal control. BetPix365 does not accept a bet from a customer that is contrary to a limit or exclusion set by the user.