Los Grandes, the second largest eSports organization in terms of fans in Latin America, has just received an important boost with Midnite, a sports betting platform, signing as its new sponsor. The partnership is exclusive for CS:GO teams. The professional CS:GO and Academy line-ups will feature firm’s logo on the uniforms. “It is the perfect opportunity for us to show that Midnite is the partner platform in sports betting, elevating the experience of each user to the maximum,” it says. 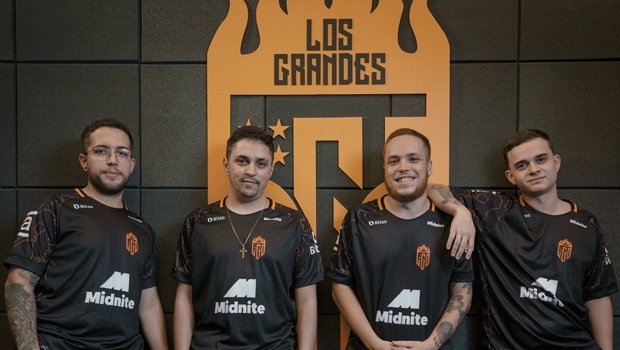 According to Rodrigo ''El Gato'', entrepreneur and founder of Los Grandes, Midnite presents great projects within the CS:GO scene, which is allied to the objectives of the orange wave: ''We continue to walk within the competitive space of CS:GO. We started with small steps, announcing lines, playing for championships and we felt it was time to bring something special to our teams,” he said.

“So having Midnite with us means we're on the right path, with companies supporting our goal of putting Los Grandes at the top of national CS:GO. Keep following us, FPS news within the organization may come soon.''

Bringing Los Grandes even closer to Web 3.0, Midnite has as one of its main pillars to elevate the user experience that is a fan of the games, giving them the possibility to cheer, vibrate and monetize alongside their favorite team.

Within eSports, the platform already presents successful cases, such as the recent partnership with streamer Alexandre Gaules, in its official FPS broadcasts. In addition, the new sponsor is the result of a partnership between Los Grandes and Druid, media specializing in gamer channels with high conversion and optimization rates.

For Diego Tagliaferro, country manager for Midnite in Brazil, being with Los Grandes is another step for Midnite in the country, which seeks to encourage and support the CS:GO scene. He noted: ''Los Grandes is a giant organization and has lofty goals within the competitive CS:GO scene. This is one of the main reasons for us, at Midnite, to bet on this sponsorship and together bring resources so that the achievements come. Furthermore, it is the perfect opportunity for us to show that Midnite is the partner platform in sports betting, maximizing the experience of each user when it comes to living the emotions of the matches.”

Created in 2018 by Rodrigo Fernandes, known as “El Gato” (The Cat), Los Grandes is an eSports organization that stood out for its performance in the Free Fire scenario, a popular mobile game and today also has Valorant, Wild Rift and CS:GO teams. With more than 19 million followers on its social networks, the organization has become popular with the community, with one of the largest eSports fan bases in Brazil.

Midnite is an English betting company, based in London. The firm's principles are to bring fans closer to the games they love, offer innovative experiences when it comes to sports betting and elevate the experience for all users.