But he was eliminated in his first day

This week world-renowned Brazilian football star, Neymar da Silva Santos Júnior, showed up at the 53rd annual World Series of Poker. After trying his hand in the Event #26: $10,000 Limit Hold'em Championship over the weekend, in which he was eliminated in his first day, the PokerStars ambassador was joined by friends for a special “Neymar & Friends” tournament held at Bally's this Monday (13). The event featured 16 prominent Brazilian poker players, including André Akkari, for a prize pool of $10,000. 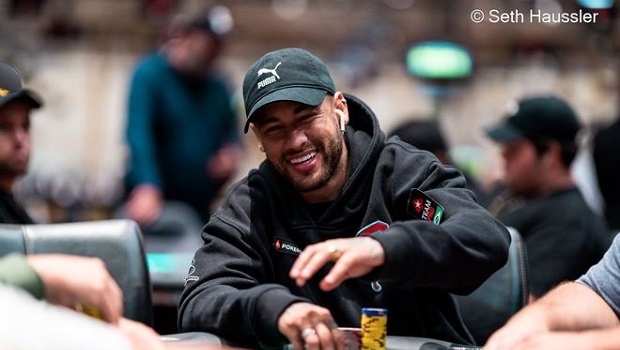 The legendary Paris Saint-Germain forward marked his attendance at the ongoing World Series of Poker (WSOP) 2022 in Bally’s and Paris Las Vegas. The world-renowned footballer sadly couldn’t cash or advance further into Day 2 of the event which had 92 entries. He did manage to win a couple of hands but could not make a big splash at the event with his poker moves.

Neymar isn’t new to the WSOP felts and has played in several events in the past. He also showed up at WSOP 2015 to show support for Brazilian players grinding at the event. The Brazilian star exited Event #26 of WSOP 2022 and moved on to grind on the $10/$25 No-Limit Hold’em cash table. The Brazilian is believed to be pretty good at poker than what most believe.

After his elimination, he was joined by friends for a special “Neymar & Friends” tournament held at Bally's on Monday (13). The event featured 16 prominent Brazilian poker players, including André Akkari, for a prize pool of $10,000.

Neymar was appointed as the Cultural Ambassador for PokerStars in April 2021. The news reports about this announcement state that PokerStars will be closely working with the footballer on various aspects of culture like music, art and design. Apart from this, Neymar reportedly rubbed shoulders with other PokerStars ambassadors like Andre Akkari and Rafael Moraes.

The Brazilian Olympic gold medalist said: “Lately, I’m ahead of them both. The last time we played, I beat them. We play a lot when we go to Brazil and they are two guys that became my friends through poker. Every conversation we have, I learn from them. So, I’m very proud to have two giant players in the poker world being my friends and having free lessons, right?”