Official sponsor of CONMEBOL Libertadores, Betfair summoned the new brand ambassador, Brazilian star Ronaldo Nazário, to present fans with tickets for the game between Corinthians and Boca Juniors, this Tuesday (28). “Seeing the emotion in the fans' eyes shows that, for Betfair, every result is indeed possible,” said Kimberley Daly, Managing Director of Betfair. 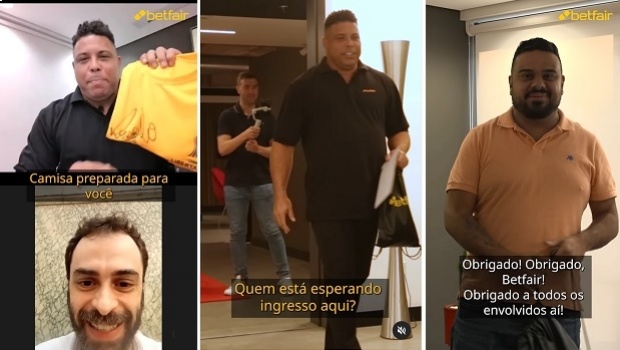 On the day that a memorable 1×1 between Boca Juniors and Corinthians da Libertadores 2012 turns 10 years old, two Timão fans won a promotion and were summoned by Betfair, the official sponsor of Libertadores, to receive their prize. And it came with a big surprise.

Willian Bueno and João Paulo Greco were presented to watch last night’s (28) match between Corinthians and Boca Juniors, for the first leg of the round of 16 of the tournament, and had their tickets delivered by Ronaldo, new Betfair ambassador and club idol.

“Being able to offer Corinthians fans the opportunity to cheer for their team in a game like this, considered a CONMEBOL Libertadores classic, is a privilege for us at Betfair. In addition to fulfilling the dreams of those passionate about football, we are providing a unique and unforgettable experience, with the presence of our ambassador Ronaldo. Seeing the emotion in the fans' eyes shows that, for Betfair, every result is indeed possible,” said Kimberley Daly, Managing Director of Betfair.

Currently Betfair is also the official sponsor of Libertadores and Sul-Americana championships, in addition to having the naming rights of the Campeonato Carioca in the 2022 season. In May of this year, Betfair announced the sponsorship contract for Palmeiras and the master sponsorship of women's football of the ‘Verdão’ for the next two years, in an agreement that includes official digital content exclusive to the club.