With the growth of the iGaming sector, Betsson decided to carry out a study using Google search data via SEMrush tool to understand which were the most searched casino games in Brazil. After the analysis, the bookmaker identified that roulette is currently the favorite game of Brazilians, followed by poker. In addition, it was possible to analyze some interesting trends in behavior, such as who prefer to bet in the “offline” and “online” environment. 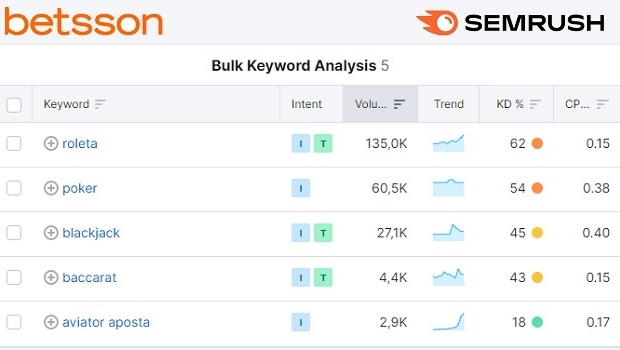 The iGaming sector has grown exponentially in recent years and the expectation is that this industry can move up to US$ 172 billion worldwide by 2030, according to an analysis by consultancy Acumen Research & Consulting.

During the study, the SEMrush platform was initially used to identify which casino games were the most sought after by Brazilians.

The roulette game is searched 135,000 times a month, including the main keyword and its variations.

Roulette, one of the most traditional games in land-based casinos, is also one of the favorites in the iGaming universe. Players usually bet on colors, which can be red or black. In addition, there is still the possibility of betting on a specific number, in which the gain is usually even greater.

Poker receives around 60,500 searches every month. As one of the most famous casino games, poker is a card game in which two or more players participate in online betting rounds, with the player having the best combination based on the card scores wins the game.

Better known in the country as “21”, Blackjack is currently the 3rd most searched casino game by Brazilians, with around 27,100 monthly searches. Because of its easy understanding, Blackjack ranks as one of the most popular card games.

The player's objective is to reach the exact value "21" in the sum of the number of cards or to get very close to this score, without exceeding it. That is, the player loses if the score of his cards is greater than “21” or if the value added by his cards is less than that reached by the dealer, who represents the bank.

Even though it is still not as popular in Brazil as blackjack, baccarat occupies the 4th position of the most searched casino games in the country, with 4,400 searches per month.

Baccarat is a casino game, which has a very quick duration. The bettor's objective is simple, to add a total of 9 points to the cards in his hand, thus winning the "table". If the player does not reach this exact value, he will need to obtain a score higher than that reached by the bank.

Receiving around 2,900 searches monthly, Aviator is the 5th most searched casino game today. Relatively new, launched in the second half of 2019, it has been increasingly conquering the Brazilian public.

Featuring a relatively modern theme and simple gameplay, Aviator consists of the user placing a bet and withdrawing it before a plane crashes. That is, the longer the plane maintains the flight without crashing, the gambler's winnings multiply. In case the plane crashes before withdrawing the bet, the user loses everything. In the game, the amount bet can return up to 5000x the initial deposit.

For Bruna Caldas, Marketing Manager at Betsson Brasil, the research confirms that the most traditional games in international physical casinos are also the most sought after by the Brazilian population in their online versions.

“We were able to observe that in Brazil there is a change in behavior between the public that makes bets offline and online. This is because in our country, slot games, which are very popular in physical slot machines, are still not so sought after by the public that prefers to place bets over the internet.”

The predilection obtained by the SemRush analysis can also be confirmed by analysis in the Google Trends tool, used to compare the volume of searches between specific terms. Below, a comparison between the most searched games in Brazil in the last 6 months.

The analysis shows that the gap between the top 2 in relation to other games is still large.

Another relevant fact is that poker showed an upward trend in the first three months of 2022, but searches for the term showed a slight drop in the following months. In the case of roulette, there was an opposite behavior, that is, there was a downward trend, but after the 15th of January it grew exponentially, until it stabilized in April.

Even though roulette was the most searched game by Brazilians in the last six months, Poker was the game that presented the highest volume of searches in the first months of the year.