In the sights of the federal government due to the lack of legalization, bookmakers increased their investments in advertising. Globo's ‘Jornal Nacional’ started to be sponsored by one of them. Betano, one of the biggest betting houses in the world, signed a multi-million-dollar contract to promote the brand on the main news show in Brazil and has been appearing since last week during breaks. 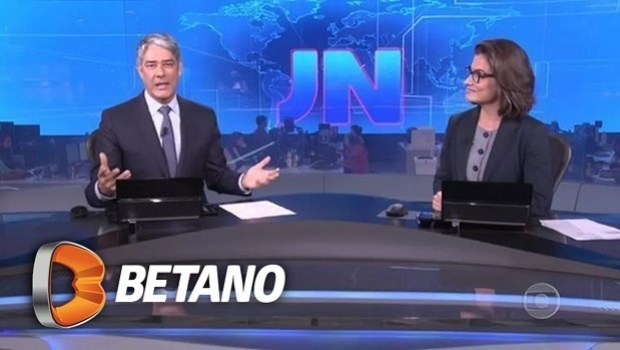 To ‘Notícias da TV’, Globo confirms that the contract is valid until December this year. Betano will offer the Monday, Wednesday and Friday editions of JN. The company's objective is to take advantage of the large audience that the broadcaster's prime time will have during the Qatar World Cup period, starting in November.

The bookmaker preferred not to give details on how much it paid for the investment. The column found that the agreement between Betano and Globo is part of a new practice by the media conglomerate, launched in the second half of last year, which sells quotas for programs on a temporary basis.

In this model, the company pays a monthly fee to expose its brand in newspapers and soap operas. In the list price available to the advertising market, it is R$15 million (US$ 2.85m) for every 30 days. That is, Betano would pay up to R$45 million (US$ 8.55m) during the three months.

Since the end of last year, ‘Jornal Nacional’ has not had an official master sponsor in its editions. In 2021, TikTok, Rexona and Mercado Pago were the TV news advertisers in different periods and paid similar amounts in relation to what Betano paid to be this year.

Are bookmakers legal at JN?

Last month, football clubs, federations and Globo were notified by the MJ-SP (Ministry of Justice and Public Security of São Paulo) for advertising and sponsorship contracts maintained with companies that operate sports betting services. The notification was sent on August 30 to 54 entities.

All of them had ten working days to respond. The initiative was taken by Senacon (National Consumer Secretariat), which intends to find out which companies have formalized contracts with the clubs, most of which are headquartered outside Brazil.

The so-called sports betting was created by Federal Law 13.756/18. In this lottery modality, the bettor tries to predict the result of football games, the scores, the number of cards applied, among others. However, unlike other lotteries, at the time of betting, the consumer already knows how much he can win in case of a hit, through a multiplier (the fixed-odds) of the amount bet.

However, the law that created the AQFs has not yet been regulated and, therefore, Senacon understands that the activity may be being explored without proper authorization and without any control, inspection or accountability mechanism.

Sought by Notícias da TV, Betano says the company is calm about the matter. "Betano, as well as other international operators, follows the issue of the regulation of sports betting in Brazil and is willing to contribute to the positive evolution of the market, which has great potential in the country."

Globo, on the other hand, states that there is no illegality: "It is important to reiterate that the placements of campaigns by all our advertisers respect the guidelines of Globo's Commercial Practices Manual, which consolidates the best practices, legal and ethical standards of the advertising market and meets the self-regulation standards adopted by Conar (National Advertising Self-Regulation Council) and CENP (Standard-Norms Executive Council)."